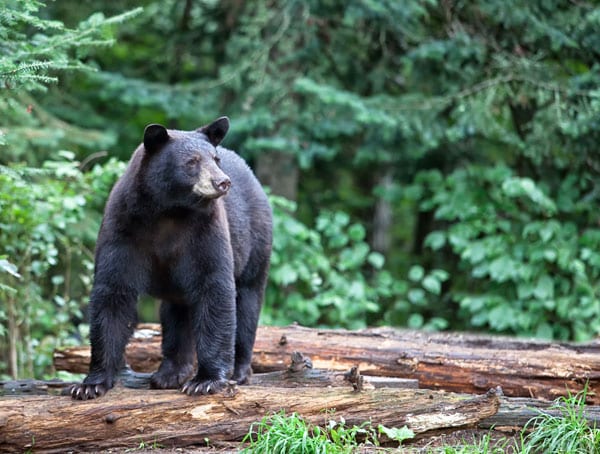 A black bear mauled a man in an Alaskan campground on Sunday after the man gave it barbequed meat.

The man reportedly left a church picnic to go on a solo bike ride near Eklutna Lake Campground. When he came across the bear, he threw a piece of meat at it. The bear at the meat, and when the man offered it another, the bear proceeded to attack.

You would think someone camping in bear country would know not to feed the bears, but this man had apparently forgotten that important rule.

The man was found by park rangers after the attack while he was washing his wounds at the campground. He was treated at an Anchorage hospital for puncture wounds and scratches to his jaw and back.

The man, whose name has not been released because he could be charged with illegally feeding wildlife, had been drinking. “He wasn’t terribly coherent,” said Ken Marsh, Alaska Department of Fish and Game spokesman. “He was unsure of where the attack actually happened.”

There were no witnesses to the attack, and the man struggled to convey to the authorities exactly what happened.

The bear wasn’t found, but according to Marsh, it’s unlikely it will repeat the attack. “The bear was pretty much goaded into this,” he said.

Another important fact to keep in mind is that while bears are massive and there is potential for them to cause some serious damage, they are basically harmless. You are more likely to be killed by a dog or get struck by lightning in the United States than you are to die from a bear attack. Nevertheless, exercise good sense when you are out in an area where bears might be present. If you feed a bear barbequed meat, you are pretty much asking for it to maul you.

Previous ArticleDan Harmon finally watched Community Season 4Next ArticleIs This the End of the Relationship?