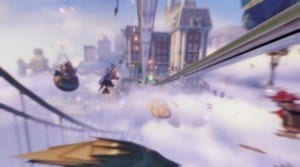 Was the six-year wait worth it?

BioShock Infinite went on sale yesterday, the first release by Irrational Games since the original BioShock was released in 2007. The videogame is for PS3, Xbox 360 and Windows PCs. Its release was delayed twice, but some videogame journalists say it was worth the wait.

BioShock Infinite takes place in an alternate-history, 1912 United States. Players take the role of Booker Dewitt, a war veteran who must travel to Columbia, a floating city, to rescue a woman named Elizabeth to settle a debt.

The original BioShock of 2007 is one of the highest-rated games ever, according to USA Today. It took place in an underwater city named Rapture, and the videogame developers sought out a new city, deciding that the story in Rapture was done.

Some praise BioShock Infinite for attempting to give a realistic portrayal of history, aside from fictional elements, like a religious community seceded from the American union. Also, Elizabeth is able to see into other worlds, which is where the game’s modern soundtrack derives from.

BioShock Infinite is a first-person shooter game, and Elizabeth is able to help Booker’s character by pulling useful objects out of other worlds for his use in fighting his enemies. Booker also has the ability to use magical powers for special weapons.

Some walkthroughs are already available for the game on IGN.com, and reviews by videogame journalists are already out, most of them positive.