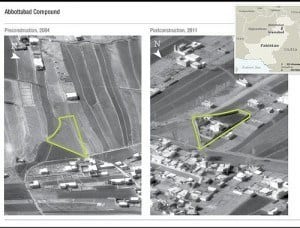 Could be facing up to 5 years

The three Bin Laden wives, one Yemeni and two Saudis, were charged today but a hearing has not been set. They were living in the compound when Navy Seal Team 6 assaulted the safe house.

The Bin Laden wives were taken into custody, along with 10 of the Saudi terrorists’ children. “The case has been registered only against the adults,” Malik told reporters in the capital Islamabad. “They can have a lawyer and they have full liberty to go to court and defend themselves.”

The children were kept in a five-bedroom house, “with proper facilities as if they were in their own home” and are free to return to their native countries if there guardians agree.

Recently Bin Laden’s brother in law published a documentary of the Al-Qaeda leader advising his children to go and live peacefully in the west and receive a good education. Only time will tell if they choose to do so.

As for the Bin Laden wives, speculation by lawyers says the maximum sentence could be 5-years in prison for their crimes. Bin Laden was suspected to have 6 wives, one of which was killed as a human shield during the Navy Seal assault.

Bin Laden was suspected of living in the compound in Abbottabad for around five years before the CIA pinpointed his location. The raid angered the Pakistani army, who was criticized for having not known of the terrorist’s whereabouts. Last month the concrete compound was demolished, removing Pakistan’s relic of the worlds most wanted criminal.