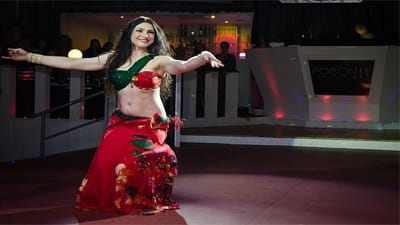 Bellydance Moves Based on Letter Shapes

If you thought that bellydance was all just a bunch of wiggling around, I sincerely hope that after reading a few of the bellydance basics articles, there is a better understanding of what bellydance is really all about. One of the other things that most people who first start out in bellydance do not understand is that there is a lot of counting, and musicality that is involved. On top of that, today I want to offer you the first introduction to the bellydance alphabet.

No the bellydance alphabet is not A is for Arabic step, B is for Basic Egyptian. There are a series of movements that are often best explained as being in the form of certain letters. Yes, this may take a little bit of imagination on your part, but trust me when I say, once you see it, it will stick.

The Basic Hip N
Hip Ns are a very basic move in bellydance and can be used to layer on top of other movements. Hip Ns also make great accent moves. The hip N is a combination movement that is still very basic, but it is built off of a vertical move and a horizontal movement. The vertical hip up and release make up a portion of this movement.

The Hip Up
The hip up is a move that originates at the hip. While the upper leg does follow along on this movement it is the muscles of the hips and lower core that will be doing most of the work on this move. By pulling the hip up and into the ribs the vertical part of the hip N is created. Releasing the hip down and slightly below neutral position, the shape of the hip N will expand.

The Hip Twist
The hip twist was covered in the article about Waist Whittling bellydance moves. With the single hip N though we will isolate the twist to be primarily on one side or the other. The twisting of the hips is a movement that originates in the hip and lower abdominal muscles. With the hip twist the horizontal motion of the hip N is created.

Combining Vertical and Horizontal
When combining the horizontal and the vertical hip movements the N shape of the hip N can be seen. The hip N is sort of a three point hip move. The hip first twists to the front, then the hip is raised up, while the hip is up twist to the back, then, release to neutral. Repeat these positions in this order for a time before smoothing the movements out.

Variations
The variations on this move is what creates the hip U and eventually other hip loop movements. By starting on the up in the front and lowering to neutral in the center, before lifting again to the back. The hip N or hip U both look fantastic when done with a flat foot, but if you are looking to add something a little more dynamic, try these moves with the heel raised. I raised heel should remain hovering however and not be used to move the hips.