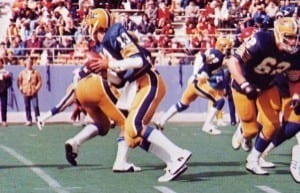 Beano Cook, the Pope of College Football, passed away and was found Thursday morning in his Pittsburgh nursing home. The beloved sports analyst known for his wit and extensive knowledge of college football died at the age of 81 in his sleep.

The media relations director at the University of Pittsburgh, E. J. Borghetti, confirmed the death of Beano Cook, who dealt with heart disease, diabetes and other illnesses. The confirmation from Borghetti was fitting being that Cook once filled the same position at the university.

With his health failing, Beano Cook took to his blog at bean-cook.com on Oct. 1 to announce his future absense. “Everything except recovery takes a back-burner now. I won’t say I’ll be back to the blog by a certain date, as some businesses might ‘promise,’ but I do hope to return soon. Thanks for your support and encouragement. Enjoy the season! — Beano” said Cook in his blog.

Beano Cook was looked up to as the number one source for analysis of college football, and in a 1982 issue of Sports Illustrated, he was deemed “the country’s leading authority on college football,” according to the New York Times. Starting his career at the University of Pittsburgh, he worked as a sports publicist, cultivating his reputation as an honest and passionate sports analyst.

Eventually, Beano Cook reached a larger audience, which gained him exposure and memories, as a commentator before Saturday college football games. He also worked for ESPN, contributing to radio and a weekly podcast.

“He was one of a kind,” ESPN executive chairman George Bodenheimer said, according to the Boston Herald. “There never was and never will be another Beano. His combination of humor, passion, love of college football and his engaging personality left an indelible mark on the sport and touched anyone who knew him.”