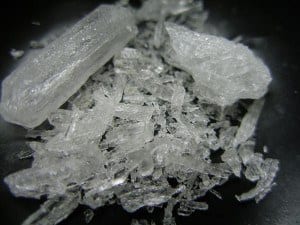 What can bath salts actually do?

Last week, Rudy Eugene, 31, allegedly took the new LSD drug, “bath salts,” which led him to strip completely and eat about 75 percent of a homeless man’s face. The entire incident was caught on tape.

Now bath salts are posing a concern outside of Miami. The cannibal attack is not the only incident thus far involving bath salts.

According to Panama City police, a woman tried to decapitate her 71-year-old mother when on bath salts, and in another incident involving the LSD drug, a man tried to chew apart the backseat of a patrol car. And in the Miami cannibal attack, Eugene stripped completely, and half stripped his victim, proceeding to chew his face off until police shot him to death after several demands for Eugene to stop.

On April 10, Daniel J. Richards, 19, was strangled in Colorado by friends trying to hold him down when he was acting violently. Only a few days after the strangulation, Richards died in the hospital. Richards’s death is believed to be the first death involving bath salts in Colorado by the U.S. Drug Enforcement Administration.

Alpha-PVP was found in Richards’s body during a toxicology test. A pattern of violence is apparent among bath salts users.

Freddy Sharp, 27, whose bath salts experience sent him to the hospital consumed by his frightening hallucinations, said, “It felt so evil. It felt like the darkest, evilest thing imaginable,”

Paul Adams, an emergency room doctor in Miami said, “This is a terrible drug because it takes a combination of methamphetamine, and the paranoia and the aggressiveness, and LSD, the hallucinations, and PCP, the extreme paranoia that you get, combines it into one, and has unpredictable effects on human behavior,”

Although the effects of taking bath salts were seen in Rudy Eugene, cannibalism is reported as unrelated to the drug. Sharp said he had no desire to “eat anybody’s flesh” under his dose of bath salts, but he added, “You feel like you’re 10 feet tall and bulletproof, and you actually do not feel any pain.”

Sharp said he felt paranoid, and while he tried to calm his own nerves under the influence of bath salts, he lost any and all control over them.

Paranoia, hallucinations and aggressive behavior are all side effects of taking bath salts, according to Fox News Latino.

While people are coming up with ingredient substitutes for those that are already banned, Congress hopes to pass a bill this year that bans all potential ingredients in bath salts.