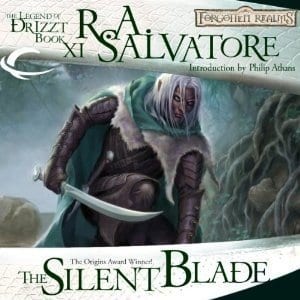 The Silent Blade
by R.A. Salvatore
(Legend of Drizzt #11)
Narrated by: Victor Bevine
In The Silent Blade by R.A. Salvatore, we see, once again, another lineup of old villains who’ve come back for a second (or third) chance to achieve their evil agendas: the Crystal Shard and Artemis Entreri. The novel switches between three different storylines–something I didn’t mind, given the fact that each storyline follows a character with a distinct path.

Once again, we continue the journeys of Drizzt and his friends and frenemies. Drizzt and his friends travel, as always, to save the world from evil. This time, the evil takes form in the return of the Crystal Shard to the hands of someone who can make its dreams for world domination come to fruition: Jarlaxle. It’s great to see the crew reunited: Drizzt, Catti-Brie, Bruenor, Regis, and Wulfgar.
The group is unsure of how to comfort Wulfgar. The seven-foot barbarian feels completely disconnected from the person he once was, prior to imprisonment and torture. Eventually, he sets out to do his own thing, hits up some bars and drowns his discomfort in booze, sex with short women, and fighting. Bartender offers him free booze, food, and a bed if he gets rid of troublemakers. Wulfgar finds a successful career in the bar as a professional brawler.
Artemis Entreri, still suffering from a blow to his ego after two defeats by Drizzt, paces restlessly through Calimport and reenters the underground politics of the seedy city. Entreri meets Dwahvel, leader of a halfling guild. He had always defined himself by his physical fighting skills, but now that Entreri’s been defeated, he feels empty…and he wants another rematch. Yeah. Okay.
This isn’t the first time Salvatore has split up a novel between several characters. The paths of our favorite characters converge towards the end, creating a sense of cohesion that was missing at the beginning of The Silent Blade.

Human Characters Get More Opportunities to Grow and Change Than Drizzt

Artemis Entreri is a flawed man–troubled, and struggling against his own weakness. And also, less predictable. Unlike Drizzt, who has always been “good”, each choice that Entreri changes as a character after he’s forced to reevaluate his values. While not quite likable, Wulfgar’s struggles are less predictable, because he too is deviating from the typical Mary Sue sort of path. He’s a broken man.
The human characters beside Drizzt are allowed to transform more, perhaps because of their shorter life spans. At heart, Drizzt’s is “good”, and that’s all he ever has been. His character has also become a lot more Mary Sue than back in The Crystal Shard, where Drizzt was depicted as a bloodthirsty swordsman. We know that it’s not so much “growth” as it is a different rewriting of his character to be more tender and “good” because the prequels, which were written later, depicted Drizzt as a person who’s always been good. However, there are mysteries in Drizzt’s life. At the end, Jarlaxle reveals a juicy tidbit about how he came to know Drizzt.
While sometimes it may seem like Entreri serves as a foil to Drizzt, sometimes it feels like the other way around–Drizzt serves as a foil to the human characters, who evolve, change, soften or harden their hearts depending on the circumstances.

I only started listening to the audiobooks after book 10, so this is the first time I’ve heard Bevine’s interpretation of Artemis Entreri’s voice. Not bad. Cold, calculating, but not hoarse or anything extraordinary, which is pretty much in character. Overall, Victor Bevine does a good job narrating this novel. His voice is engaging and expressive, pulling me into the story as I drive to and from work each day.

The Silent Blade by R.A. Salvatore, narrated by Victor Bevine was a good read (or “listen”, since I had listened to it by audiobook). I like where this arc is going. Wulfgar’s rough life in the spine of the world opens up an opportunity to explore a different part of the world of Faerun.
My rating: 4.5/5 (rounded to 5)