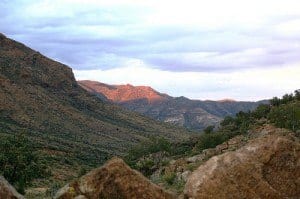 What started as a 200-acre wildfire quickly escalated to 6,000 acres overnight. Driving down Yarnell Hill on Monday was the heartbreaking scene of vans headed to a coroner’s office carrying 19 elite firefighters who lost the battle against a vicious wildfire.

These firefighters are known as “Hotshots” who are specifically trained to fight off the country’s most brutal and deadliest wildfires. Sadly, 19 out of 20 Hotshots lost their lives on Sunday after they reported to their team leader, Clay Templin, that the entire Hotshot crew had deployed their shelters.

During an interview with Dan Fraijo, the Prescott Fire Chief said he feared the worst when he received a call Sunday afternoon from someone assigned to the fire.

“All he said was, ‘We might have bad news. The entire Hotshot crew deployed their shelters. When we talk about deploying the shelters, that’s an automatic fear, absolutely. That’s a last-ditch effort to save yourself when you deploy your shelter.”

When a fire has become too overwhelming for Hotshots to handle, they are trained to deploy their emergency shelter in which they step into, lie face down on the ground and pull the fire-resistant blanket over themselves. This special fabric was designed to resist heat, trap cool and maintain breathable air for a short period of time while the flames pass over them.

Arizona governor, Jan Brewer, expressed her deepest sympathy, saying it’s “as dark a day as I can remember.”

“I know that is it unbearable for many of you, but it also is unbearable for me. I know the pain that everyone is trying to overcome and deal with today,” said Brewer, trying to find her voice numerous times as she spoke to residents at Prescott High School.

On Monday, President Barack Obama called Brewer from Africa to reinforce his commitment to battling the deadly flames by providing federal support to defeat the fire.

More than 200 homes were threatened in a town of 700 people.

Over 1,000 residents turned out Monday to a gym at the Prescott campus of Embry-Riddle Aeronautical University to honor those killed in the Yarnell Hill wildfire. After the ceremony, drumming to a march down the wooden steps of the auditorium were several wildfire fighters sporting Hotshot t-shirts as a symbol of support for the lives taken on Sunday.