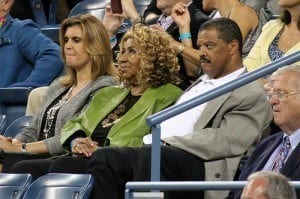 Daily Mail reports that Franklin, 69, has become engaged to her long-time companion William Wilkerson. Franklin and Wilkerson are reportedly considering a summer wedding, perhaps in Miami Beach, with a reception on a yacht following the ceremony.

Franklin is considering Vera Wang, Valentino and Donna Karan to design her dress. This will be Franklin’s third marriage.

Franklin has lost 85 pounds, igniting rumors that she underwent gastric bypass surgery. Franklin addressed the rumors, saying, “Definitely not – and would not. I heard that rumour. I said, ‘That is crazy.’ It definitely was not the bariatric or, what is it, gastric… Yeah, I can’t even tell you the correct name of it.”