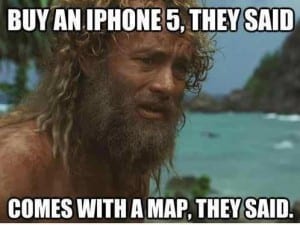 In an open letter to customers published today on Apple’s website, CEO Tim Cook apologizes for the many glitches in Apple Maps, the new mapping app on the recently released iOS6 software that is included on the iPhone 5.

The new operating system doesn’t support Google Maps, the iPhone app of choice for earlier versions of the software. The Apple CEO went as far as to suggest that while the company works out the many kinks in its app, customers can create an icon on their home screen that takes them to Google Maps online. Tim Cook even suggested using Bing or Mapquest instead of Apple Maps, which are owned by rival Microsoft.

“At Apple, we strive to make world-class products that deliver the best experience possible to our customers,” Cook writes in his apology letter. “With the launch of our new Maps last week, we fell short on this commitment.” The Apple CEO added, “We are extremely sorry for the frustration this has caused our customers and we are doing everything we can to make Maps better.”

Customers were largely disappointed with the new map application on iOS6, which used mapping data from TomTom as a foundation. Complaints from users included Apple Maps directing them to the wrong location, even after putting in an accurate address, as well as missing information.

“There is a difference between a map and an app. We don’t develop the app,” TomTom media manager Cem Cohen said last week, when the glitches came to the public’s attention. In his apology letter, Tim Cook acknowledged that the app fell short of expectations and promised that the company was working hard to fix it.

“The more our customers use our Maps the better it will get,” wrote the Apple CEO, “and we greatly appreciate all of the feedback we have received from you.”