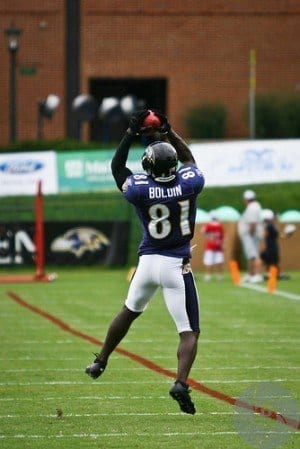 Anquan Boldin was traded by the Baltimore Ravens to the San Francisco 49ers Monday for a sixth-round pick.

ESPN speculates that the Ravens will regret the decision to trade Boldin and that the decision shows how little the team valued him or how much they needed the $5.5 million in cap room they gained with the trade.

Boldin was responsible for many clutch catches and a few touchdowns for the Ravens in the playoffs leading up to the Super Bowl.

According to ESPN, the Ravens have no specific player in mind to replace Boldin and supposedly traded him because he would not take a pay cut from his $6 million salary. ESPN defends Boldin, though, by saying that he was not overpaid compared to other members of the team.

Boldin is 32 years old and might have been traded because of his age, the Ravens possibly wanting to trade him before his game declined. However, it has been said that Boldin’s game is not based on speed, so he will not decline as quickly as other players.

Boldin’s old teammates praised him for the work he brought to the Ravens.

Ravens running back Ray Rice told Yahoo Sports, “[Ravens quarterback] Joe Flacco played lights-out, but if there was a runner-up MVP, you’d have to git it to Anquan Boldin. He was just that guy – he was the man. I mean, you couldn’t take that away from him.”

Flacco reportedly told Boldin to “stick to his guns” when Boldin was asked to take a pay cut.

Sports analysts continue to wonder why the Ravens made this decision, but the deal is done. Blodin is now with the 49ers.