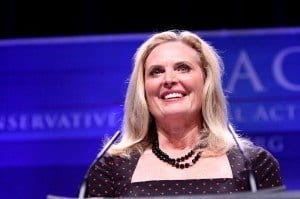 Ann Romney addressed last night’s female attendees of the Republican National Convention with a resounding declaration of conviction: “I love you women!”

But Ann Romney was not only aiming to convince women voters of her love. She also sought to assure the women of America that her husband, Mitt, will keep them safe, telling a story about how he kept her safe on the way home from the dance where they first met. In a continued appeal to traditional family values, she told convention attendees that “It’s the moms of this nation … who really hold this country together.”

Amid a wash of criticism from the left — particularly from women — surrounding the Republican Party’s stance on women’s health care, Ann Romney’s speech stood as an appeal to the female population to stand by her man. She painted Mitt Romney as dependable and trustworthy, saying, “This man will not let us down” and “You can trust Mitt.”

Her speech also enumerated the ways in which the Mitt and Ann Romney story is one that everyday Americans can relate to, despite critics’ assertions otherwise.

Mitt and Ann Romney married when Ann was 19, and in her speech, she addressed those who called theirs a “storybook marriage.” To the contrary, she explained, she and Mitt had to overcome everything that normal couples do, from eating pasta and tuna fish when they were first married to coping with breast cancer.

Mitt worked hard for his money, Ann Romney said, and he shouldn’t be criticized for being successful. Speaking to those who denounce the Romneys for being “privileged,” she said that she and Mitt are “no different than the millions of Americans who quietly help their neighbors, their churches, and their communities. They don’t do it so that others will think more of them.”

Ann Romney told ABC’s Diane Sawyer that she “felt really good” about taking the stage at the convention. While she didn’t offer any particulars about Mitt’s plan for America, she took the opportunity to assure voters of his authenticity.