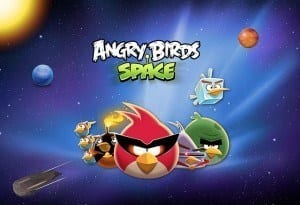 The latest rendition to the popular application

“Aaaaaaaw-weeeeeeeeeeeeeee” says the angry bird as it flys through the air, hunting down those blasted green pigs. Or, is that you making that sound because you just found out that today is the day so many have been waiting for, the new release from one of the greatest application franchises of all time- Angry Birds Space. Yea, that’s right Space.

Along with the debut of the highly anticipated game that NASA is endorsing, Wal-Mart is selling bunches of Angry Bird merchandise, MTV is using the game to help fight online bullying and, to top it off, Seattle is turning their 300-foot space needle into a giant sling shot.

So many of you are wondering, sure Angry Birds Space could be just as addictive as all the other titles but what makes it different? All the other games have been rather similar. But wait till you hear this, the game has changes. Along with judging the normal trajectory of your bird slingshot, now you are forced to factor in the gravitational pull of the planet you are on if you want to pop those wretched pigs.

“Once again, the physics in Angry Birds Space is phenomenal, giving players a great sense of control,” USA Today said about the new game. “Why take on a group of pigs head on when a well-placed trick shot can send a bird orbiting around a planet to strike a weak point?”

See the games trailer below: