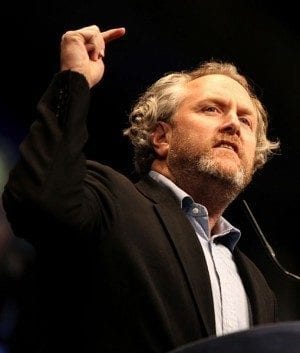 Andrew Breitbart died suddenly on the first of this month. He was 43-years-old.

The conservative blogger and journalist Andrew Breitbart was rushed to the emergency room at Ronald Reagan UCLA Medical center after he collapsed.

The Los Angeles County Coroner’s office confirmed that it will investigate the case, given how young Breitbart was. Officials said it will take several weeks to determine a cause of death, but they believe he died of natural causes.

“It looks like a heart attack, but no one knows until an autopsy is done,” his father-in-law, actor Orson Bean, told The Associated Press. ”He was walking near the house somewhere…. He was taken by paramedics to UCLA and they couldn’t revive him,” Bean said.  “We’re devastated. I loved him like a son.”

Andrew Breitbart is survived by his wife, Susannah, four children, Samson, 12, Mia, 10, Charlie, 6, and William, 4, his parents, Jerry and Arlene; and a sister, Tracy. The family has not announced memorial arrangements.

The tea-party activist spent ten years helping to edit the Drudge Report and later helped launch the Huffington Post. In 2005, he launched his news aggregation site Breitbart.com. His goal, he often said, was to “destroy the institutional left.”

He made a name for himself in 2009 when he posted an undercover video, in which a pair of conservative activists posing as a prostitute and her boyfriend asked employees of the community group ACORN for help with a brothel that would house underage Salvadorans. Some of the workers seemed too helpful, humiliating ACORN. Congress defunded the organization shortly after.

Breitbart’s last column, “The Vetting, Part I: Barack’s Love Song to Alinsky,” was published posthumously on Sunday along with the relaunch of a newly designed Breitbart.com. The column examines the president’s “love of [Saul] Alinsky.” Last month at the Conservative Political Action Conference in Washington, D.C. Breitbart told the audience that he had damaging “videos” of Obama that he planned to release in the months leading up to the 2012 election.