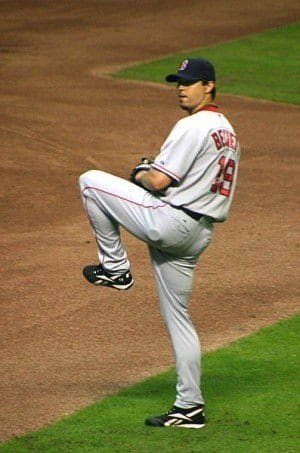 Andrew Bailey, new closer for the Boston Red Sox, has a “thumb situation,” according to manager Bobby Valentine. He is flying to Boston today to get the thumb examined.

Not only does Andrew Bailey have a thumb situation, but it was revealed on Monday that Josh Beckett also has a thumb problem and is going to be examined in San Antonio, Texas, on his way to Detroit “just for peace of mind,” said manager Bobby Valentine.

“[It’s] just been a little situation,” Valentine said, in a vague description of Beckett’s injury. “I think I might’ve mentioned it 10 days ago that ‘There’s a situation that we’ve been dealing with.’ As in all cases, you have to be prepared, and I think we are. I think we’re covered with whatever happens. The good news is, in his 100 pitches yesterday, he felt terrific.”

Valentine has not confirmed who will replace Andrew Bailey as closer if Bailey landed on the disabled list, but Alfredo Aceves, Mark Melancon or Vicente Padilla are all viable options.

He said he will not finalize the lineup until after Tuesday’s game against Washington at Nationals Park.

Andrew Bailey’s debut with the Red Sox has been less than impressive. The player arrived from Oakland with an injury-plagued reputation, hurt himself doing a vertical leap early in camp, eventually caught up, and is now suffering this situation with his thumb.