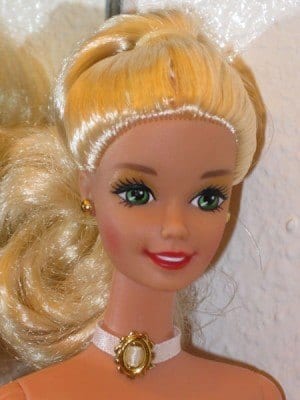 Botox for her 15 year old, plastic surgery vouchers and pole dancing lessons for her 6 year old. Has Mattel heard what Barbie is up to these days?

Anderson Cooper kicked the “Human Barbie” off his show this week after calling her “dreadful.”

The mild-mannered news anchor and host of the daytime talk show Anderson on CNN had Sarah Burge on his show this week, a British woman whom holds the Guinness World Record for having the most plastic surgeries in order to become a “Human Barbie.”

The surgeries reportedly amounted to hundreds of thousands of dollars, and Burge recently made headlines for giving her seven-year-old daughter vouchers for breast implants and liposuction… to be redeemed upon turning 18-yeas-old of course—anything younger would be inappropriate.

The “Human Barbie” also encouraged her 15-year-old daughter to get Botox to prevent her from sweating on stage during dance performances, because, “You wouldn’t see Beyonce sweating on stage.”

Anderson Cooper pointed out that we actually do see Beyonce sweat on stage.

“I would prefer to actually oversee my daughter’s Botox than actually have her go underground, finding a voodoo witch doctor or in fact getting it off the internet and administerating [sic] it herself,” Burge said.

Meanwhile, Anderson Cooper had a difficult time hiding the disgusted look on his face, and eventually gave up the effort entirely.

“Um,” Anderson Cooper said after a pause, “I honestly have nothing more to talk to you about. I got to be honest… I got to just stop. Sorry. I try to be really polite to all my guests, I just think you’re dreadful, and I honestly don’t want to talk to you anymore.”

“That’s fine, that’s fine,” Burge kept repeating as she walked off stage to the sound of mass applause by the audience.

After the show, Anderson Cooper explained on camera his decision to kick the “Human Barbie” off his show.

“I got the feeling this was about publicity for her. I regret having her on in the first place and I regret how things ended,” he said. “It didn’t seem like it was an honest discussion.”

Not only had Burge gone through the numerous surgeries to make herself look like a Barbie doll, bought plastic surgery vouchers and pole dancing lessons for her youngest daughter and allowed her older daughter to get Botox at age 15, Burge was also the one who called the British tabloids with the sensationalist stories.

Burge works with plastic surgeons all over the world, and part of her job is allegedly to generate press about plastic surgery. But the Human Barbie has taken her work home with her in this case.

The Human Barbie couldn’t let Anderson Cooper have the last word. Later on Burge tweeted, “Thank you America for your emails yes Anderson did make himself look an ass he has a big mouth for a LITTLE man.”[sic]