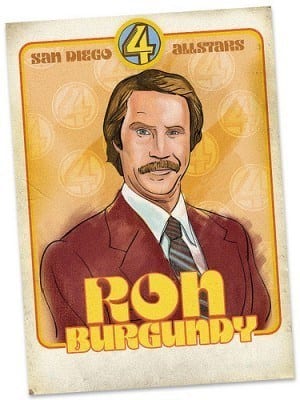 Anchorman 2 isn’t slated to hit theaters until sometime in 2013, but two trailers for Anchorman 2 have premiered on Will Ferrell’s website Funny or Die, Featuring San Diego’s top newsmen.

With no current script written, there isn’t any real footage of Anchorman 2. Instead, the two trailers features Will Ferrell, David Koechner, Pull Rudd and Steve Carell doing what they do best and spouting off the most utterly random comments.

The clips open with a voice over stating, “In the age when the dinosaurs’ roar greeted the dawn, and apes rode the winged horse across the valley of Eli, there was a lone stranger who offered comfort, wisdom and overly sexual neck massages. It was said he would one day return. That day has come.”

Neither of the trailers offer up much of a hint to the plot of Anchorman 2, but the man who loves, scotch, scotch, scotch will surely not disappoint.

“It’s jean creaming time … aint’t this an old-fashion shot to the nut sack!”

Checkout both trailers below, just try not and spend your entire day watching them.

Exclusive Anchorman 2 Teaser from Will Ferrell
Previous ArticleSnooki It's a boy!Next Article9,000-year-old mask up for auction