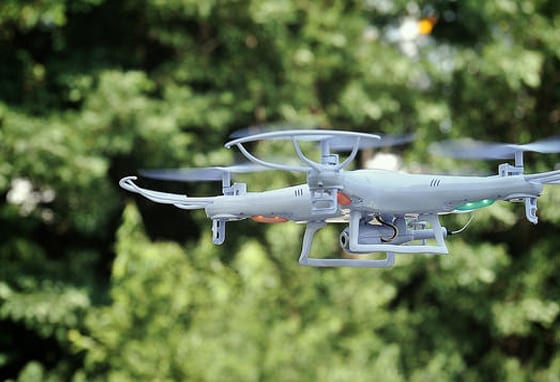 The American public should take a brief moment to tip their hats to Amazon’s CEO Jeff Bezos for choosing a goal, pursuing it, and shaking off immense criticism. For his Amazon Prime Air drones. For decades shipping has relied on boats, planes, and cars to carry items from one end of the globe to another. With Amazon’s announced Octocopter, shipping takes an exhilarating new turn. Want your package within 30 minutes or less? Amazon is working on it, and Octocopter drones are shaping up to be the answer.

Perhaps the most exciting part about all of this is that the initial announcement for Octocopter is old news at this point. CBS wrote about Jeff Bezos’s unveiling on Charlie Rose’s 60 Minutes interview in December of 2013. During this interview Bezos unexpectedly showed off the then-secret drone project that Amazon was fueling, claiming that customers would be able to use this service within the next four-five years. The last we heard, “Prime Air” needed more FAA approvals and safety testing. That was three years ago. The clock is ticking, and it’s possible we’ll see these Amazon Prime Air drones in the airway sooner than we can conceive.

You will also like: Comparing the giants of the web Marketplace

Amazon’s Prime Air plan for the drones is to have them pick up packages in small yellow buckets at Amazon’s fulfillment centers and then travel by air to the customer. The goal is to have products reaching customers 30 minutes after the purchase has been submitted. If that’s not premiere customer service, I don’t know what is. However, these Amazon Air Prime drones are only expected to carry packages up to five pounds. This makes sense for where drone technology is at the moment, although it might come as a disappointment for those looking to order heavier items.

The Octocopters will fly under 400 feet and weigh less than 55 pounds. They will use a large degree of automation for safe operation up to distances of 10 miles or more. This is stated on Amazon’s own Amazon Prime Air website, and this fact hints at the drones being initially semi-remote-controlled. Amazon claims that these “Prime Air vehicles” will be the future of package traffic and that we will soon see theses Amazon Prime Air drones as often as anything else. Time will tell if Amazon will deliver on this promise.

The Expanding World of Technology

With the advent of SpaceX landing their Falcon 9 rocket and many other technological advances, it is clear that we are entering an age where innovation is the name of the game. The 2000’s are finally shaping up to be the futuristic years science-fiction novels lauded and predicted, and consumers and scientists alike have the excellent good fortune of living to see them through. These are exciting times and the Amazon Prime Air drones are arriving just in time.

You should also read: Is it time for an Amazon style smoke shop