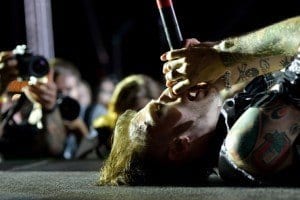 The inaugural Alternative Press Music Awards took place on Monday at Voinovich Park behind the Rock and Roll Hall of Fame and Museum in Cleveland.

With legendary appearances from Slash, Ice-T, the Fall Out boys, Joan Jett & The Blackhearts, All Time Low and more, it was a star-studded event hosted by none other than Blink-182’s Mark Hoppus.

The award show brought what was once classified as underground music to the surface with some incredible musical performances throughout the night. Some highlights include: Asking Alexandria delivering an astounding cover of Duran Duran’s “Hungry Like the World,” turning it into a pop-punk anthem with raging guitar riffs; Joan Jett teaming up with singer Laura Jane Grace from Against Me! and capture the audience with their performance of “Soulmates to Strangers” while Slash performed a cover of the Rolling Stones number “Star Star.”

Overall, the star-studded event didn’t fail to deliver with it’s hip-formal feel and great combination of legendary rock and roll and pop-punk spice catering to fans of all ages.