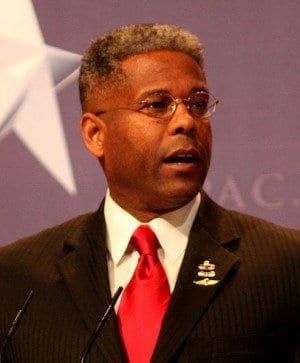 Congressman says half the Democrats in Congress are Communists

When a moderator asked Allen West what percentage of the American legislature are card-carrying Marxists or International Socialist, West seriously replied, “It’s a good question. I believe there’s about 78 to 81 members of the Democratic party who are members of the Communist Party. It’s called the Congressional Progressive Caucus.”

Libero Della Piana, a vice-chairman of the national communist Party said that there are no members of the Communist Party in Congress.

This is not the first time Allen West has said something bizarre. He told Nancy Pelosi and Harry Reid to “get the hell out of America.” Florida Democratic Rep. Debbie Wasserman-Schultz got on his bad side he wrote her a letter calling her “the most vile, unprofessional and despicable house member.” He has described President Obama exhibited “third-world dictator-like arrogance.”

Another crazy Allen West stunt? While in the Army he shot a gun next to an Iraqi detainee’s head during an interrogation, which led to his forced retirement.

Let’s hope it doesn’t come to that.