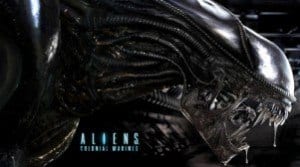 Ripley would be ashamed

When Aliens: Colonial Marines was shown at PAX East last year, the dynamic lighting, creepy fog, and gleaming visuals caused expectations to soar. Gearbox, beloved developer of Borderlands and Borderlands 2 was creating a reputation of delivering top-notch, quality games … Duke Nukem Forever aside. The release of A:CM though, will leave a bitter taste in your mouth as the story, visuals, and overall aesthetic of the game fall well short of the expectations from the early viewings. Instead of a horror/action game that elicits fear and suspense, players are met with a washed-out version, from top to bottom, of what the game should be.

Playing as the marine Winter, your squad responds to a distress signal and boards Sulaco, the ship in danger. Immediate suspense is triggered with an explosion and loss of squad mate, but the tension ends there. From that point the story is an empty stumbling from one objective to another with simple, linear action in between. Maintaining a strange ‘No Marine Left Behind’ motto, the squad continues to press forward to rescue kidnapped members of the team or to meet back up in order to finally finish their mission. The first part of the game has players traversing the ship which allows some semblance of tension, but that may be attributed to the fact that players keep expecting danger and horror to present itself. You’ll quickly find though, that there is little horror to be delivered and what is shown is quickly dismissed because of awful visuals.

Eventually players find themselves on the planet below which removes the feeling of being boxed in, arguably a key element to feeling helpless in the Aliens movies. Instead, traversing a broken, cocooned planet will give players a strange feeling of openness, even during the scenes that occur inside. Warehouses and laboratories present themselves with the intent of creating a sinister motif, but instead present strange action sequences completely devoid of any dread. Even during the sewer level, where alien husks litter the waist-high water, the height of any fear occurs when a wandering alien saunters by, ignoring you as you remain quiet — a cue taken from your squad-mate who unsurprisingly has come across these aliens, despite being separated from him only moments ago. It’s the forced fear that acts against Aliens: Colonial Marines, like the cute girl who tries too hard to be funny; once you realize how bad they’re trying and failing, every time it happens thereafter just makes it worse. Scenes that should inject some sort of response tied to fandom is poorly executed and feels empty. Even using the enormous exosuit, a canonical scene from the movies, is lacking any feeling whatsoever.

The multiplayer does add some minor enjoyment to what is at best an average game. Players can play in deathmatch or objective based games, each of them a bit different than the next and varying from the typical FPS multiplayer modes we’ve seen time and time again. In Extermination for instance, players acting as Marines are tasked with moving from point to point in an effort to capture a particular area and, once accomplished, destroying the alien eggs waiting to hatch. Their opponents, the aliens, are asked to simply stop them from achieving that. Once the round is over, teams switch sides. Leveling up, something that is in the campaign and carries to the multiplayer, unlocks new options for your weapons, new player customizations, and new abilities for your aliens. What ends up being a confusing mess is the fact that players have two rankings, one for marines and one for aliens. Your rank determines what you’ve unlocked and, essentially, how good your character actually is. Finish the campaign before venturing into multiplayer and you start with a Marine well into his career, while your alien is a weak, confusing organism that will get mauled repeatedly by shotgun wielding Marines for the first few hours of gameplay.

Tying in a license to a beloved horror movie like Aliens immediately lends credibility to the game itself, however after the lackluster story of Colonial Marines paired with visuals straight out of last generation’s consoles will prove an instant disappointment. Expectations were high for Aliens: Colonial Marines, but the generic story leaves much to be desired. In a world as robust as the one the license lends, the game should have been a AAA title to help kick off 2013, instead players are left with what would be a mediocre budget title if the Aliens license wasn’t attached.