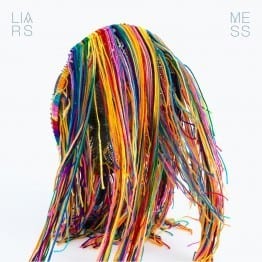 Hailing from Los Angeles, California, Liars is a punk rock and electronica band that consists of three members: Angus Andrew (vocals/guitar), Aaron Hemphill (percussion/guitar/synth), and Julian Gross (drums). The band experienced its genesis at the dawn of our millennium in 2000, and has since then relocated to different places, including New York (where the band became famous) and Berlin. Liars has also developed quite a following in the United Kingdom.

With each album, Liars has evolved its style between elements of punk rock, electronica, and dance. Mess is the Liar’s seventh album. A Mute press release describes Mess as the band’s followup to their previous album, WIXIW. Where WIXIW featured the band in an uncertain and ambiguous state, Mess shows the Liars storming out from the glassy sea of introspection with fire in their eyes.

A sense of unease and sinister vibes pervade this album’s throbbing alternative dance beats. Liars’ relationship with uncertainty continues in this album, except their response is angrier and more unsettling than in the previous album–an aggressiveness packaged with dance punk, particularly in “Pro Anti Anti” and “Can’t Hear Well.”

A common theme within the lyrics in this album is the struggle against fear and vulnerability. The occasional crooked lines of lyrics in the lyrics booklet give off the sense of an overwhelmed mind that questions its own sanity at times.

Snippets of lyrics that reveal their anxious struggle against inner demons in Mess:

“Mask Maker” (Track 1): “I’m long past saving / I’m swallowing degenerates whole / It took both ambition and fear to finally figure it out / Well it looks so appealing in real life it’s actually not”

Here’s a link to the music video of Liars’ single version of “I’m No Gold.” Just a warning: the look on the guy’s face is the stuff of angry, head-throbbing nightmares.

I prefer the album version of “I’m No Gold.”

Overall, Mess is a compilation of unsettling alternative dance tracks that explore the emotions associated with anxiety and uncertainty. Liars has been experimenting with their style for a very long time, and this is the latest update to their direction, which emanates aggressive beats and vibes while maintaining its reflective elements in the lyrics.

Find out more about Mess by Liars on: Amazon