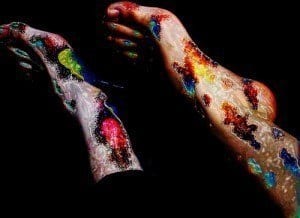 According to the 24-year-old’s father, Aimee has gone from meditation to morphine in order to subdue her pain

Aimee Copeland, the 24-year-old Georgia student who made national headlines following her gruesome, tragic battle with a flesh-eating disease, has pleaded for painkillers after surgery to replace patches of ravaged skin and muscle lost to the fight, according to her father.

Aimee Copeland has been in the national spotlight for over six weeks since a fall from a homemade zipline near the Little Tallapoosa River that left her infected with necrotizing fasciitis. The disease claimed her left leg, right foot and hands. Now after a series of skin grafts to replace areas of her bacteria-ravaged skin, Aimee Copeland is fighting extreme amounts of pain.

Aimee Copeland initially refused morphine, telling her father she believed it would make her “a traitor to her convictions.” Aimee Copeland preferred to use meditation as a form of treating the lingering pain but found that the sting of the skin grafts was just too much.

“Aimee is now taking pain medication in as liberal a dose as can be prescribed,” Aimee’s father, Andy Copeland, posted in his blog. “If she even dared to refuse taking it, which she wouldn’t, then the doctors would most certainly administer it in an IV drip.

“The allowable doses of Morphine, Fentanyl and Lyrica are often inadequate to deal with the pain that Aimee is now experiencing,” Copeland added. “Please believe me when I say that Aimee’s refusal to use pain medication has ceased following her most recent surgery. She is now requesting it ahead of schedule.

“She says that she feels like a patchwork quilt, because her body is a collection of skin grafts and bandages,” wrote Copeland.

A skin graft is a thin patch of skin surgically shaved from one area of the body and transplanted onto a wound.

“We can get sheets between 10 and 12 thousandths of an inch thick,” said Dr. J. Blair Summit, assistant professor of plastic surgery at Vanderbilt University Medical Center in Nashville, Tenn. “It’s a fairly straightforward procedure.”

Regardless of the procedure, “Aimee’s wound repair is a life-long process that will require ongoing attention and medical care,” wrote Aimee’s father.