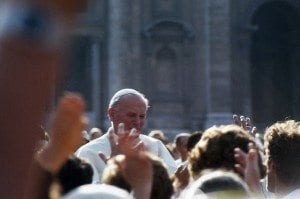 Pope Francis leads in wake of John Paul II’s Awesomeness. How will he match up?

Even eight long years after his death, Pope John Paul II, taking on the image more of a rock star than Catholic pope with the nickname JP2, is leaving big shoes to fill for the new pope, Francis.

Pope Benedict XVI never inspired the same admiration as John Paul II for a number of reasons.  Chiefly among them, he was elected to the papacy when he was older.  At age 78 and a man who spent the majority of his life doing scholarly work, he lacked the charismatic qualities that endeared million of Catholics to his predecessor.

And on the heels of Pope Francis’s election, a community in Texas is celebrating the legacy of Pope John Paul II, who the church may beatify as early as the end of this year, by creating a new exhibit at the Catholic Renewal Center in Lubbock.  The exhibit will feature more than 110 personal effects of John Paul II, including pictures, personal effects and documents.

The exhibit is called “I Have Come to You Again.”  The exhibit opens 9 a.m. Friday, March 15 and ends May 31.  The exhibit will cover four parts: his childhood and adolescence, his rise in the church, his years as pope, and his legacy, according to the Lubbock Avalanche-Journal.  Ticket costs are $15 for adults and five dollars for children.

John Paul II connected with the Catholic masses in a way that Benedict did not.
“I think Benedict always saw himself as a transitional pope,” said the Rev. Michael Collins to Foxnews.  “He knew he couldn’t bring the same energy or the same characteristics or qualities to the office.”

Pope Francis is viewed as more progressive, as a result of his Jesuit background, choice of name and Latino background.  Only time will tell whether he can live up to the legacy of John Paul II.