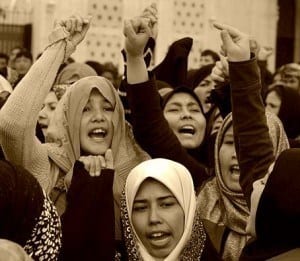 An Afghan woman has been executed by the Taliban in a gruesome scene depicted on video. The footage, obtained by Reuters, shows a man who approaches a young woman from behind and open fires with a burst from his Kalashnikov. The execution of the 22-year-old woman is celebrated by witnesses and their chorus of cheers can be heard on the video.

“Allah warns us not to get to close to adultery because it’s the wrong way,” says one man as the shooter approaches the woman from behind. “It is the order of Allah that she be executed.”

The execution of the Afghan woman has sparked an international outcry and has left many disgusted at the Taliban’s treatment of women.

The Age reports that Australian Minister of Foreign Affairs Bob Barr labeled the execution as “barbaric,” and serves as “another stark reminder of the brutalities that [are] regularly committed under Taliban rule, and of the task ahead of us in advancing the rights of Afghan women and girls.”

British Foreign Secretary William Hague tweeted his disgust at the Afghan woman’s execution, writing: “Disgusted by the barbaric public execution of an Afghan woman by Taliban. Shows it’s vital to stand up for women’s rights in #Afghanistan.”

The United States’ top commander in Afghanistan, U.S. Gen. John R. Allen, told the Washington Post’s Sayed Salahuddin and Kevin Sieff that the brutality conducted by the Taliban “must be condemned in the strongest terms.”

Gen. Allen added, “Let’s be clear, this wasn’t justice, this was murder and an atrocity of unspeakable cruelty.”

The provincial governor of Parwan Province, Basir Salangi, told Reuters that the video, which was obtained over the weekend, was filmed last week about an hour outside the Afghan capitol of Kabul.

“When I saw this video, I closed my eyes. . . The woman was not guilty; the Taliban are guilty,” said Salangi, who added the woman was sexually involved with two Taliban commanders and that they executed her in order to settle a dispute.

Afghan President Hamid Karzai ordered the arrest of those responsible for the execution Monday.

The Taliban has so far denied any involvement in the execution.

Local Afghans have voiced their own outrage at the Afghan woman’s execution. One 42-year-old shopkeeper, Sayed Jalal, in Charikar, the provincial capital of Parwan Province about 25 km (15 miles) south of Shinwari, the site of the execution, voiced his frustration with the Taliban’s acts of violence:

“We will take revenge for this. Their brutality and such inhumane acts are why we hate the Taliban,” Jalal said.