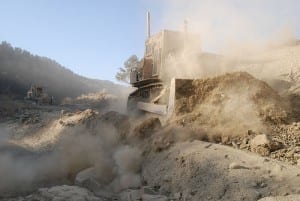 Rescue officials believe the landslide buried between 25 and 30 homes

An Afghan quake has buried more than 20 homes under mud and debris in the northern Baghlan province. As many as 50 people are feared dead.

The initial Afghan quake struck the Hindu Kush region Monday morning registering at a magnitude of 5.4, that quake was followed by another with an even-greater magnitude of 5.7, according to the U.S. Geological Survey.

Rescuers have pulled two women’s bodies from the rubble, according to provincial Gov. Abdul Majid. The U.N. has confirmed one other death and has also said that houses were buried or destroyed across five districts.

“It’s impossible to get to the bodies,” Majid said. “They estimate that they are buried in 30 meters of rock. There are tons of rocks and stones covering the village.”

Majid estimates that the landslide buried one hectare (2.5 acres) of land around the remote village of Sayi Hazara.

Nobody will be alive,” added Majid.

The mountain village, home to about 20 families, was so inundated with mud and rocks that there were no visible signs of the buildings underneath. Rescuers have given up trying to use shovels to dig through the earth, according to a spokesman for the provincial police chief Jawed Basharat.

“We need bulldozers or other machinery to remove all this earth and get the bodies out, or the survivors if there are any,” said Basharat.

According to residents of the area, between 25 and 30 houses were buried by the landslide.

It takes more than two hours to drive the approximately 25 miles from the Baghlan provincial capital of Pul-e-Khumri to the site of the landslide, the Burka district.

A team of rescue workers and paramedics were led by police from Pul-e-Khumri. Upon arriving at the scene of the landslide, they realized that those that had survived had already been transported to area clinics.

“The ambulances were there, but there was no one to put in the ambulances,” Basharat said.

Basharat has said that the police team returned to the provincial capital when they realized there was little they could do.

The U.N. has said in a statement that it is working with local authorities to help in the rescue effort.