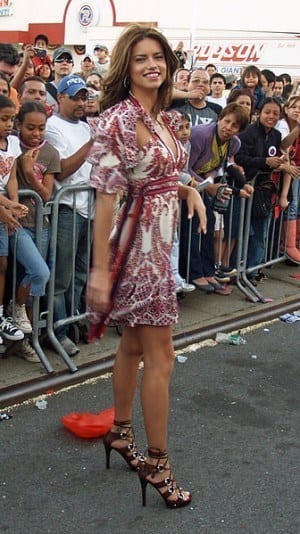 Her second child is on the way

The big news came via Adriana Lima’s twitter page reading, “Big news everyone! Marko and I are so happy to share some wonderful news with all of you! #ImPregnant.” She would later add, “My favorite job in the world is being a mom! My family could not be more happy!”

Breaking the hearts of millions of men worldwide the model/actress, eloped with her Serbian basketball playing husband Marko Jaric back in 2009. She previously told People “I knew he was the one and I could see myself married to him and with a big family.” The 30-year-old Adriana Lima and her 33-year-old hubby already have a two year old daughter named Valentina.

Adriana doesn’t get the joy in her life from being one of the most renowned models in the world, but rather from being a mother. “Every day I discover something about her,” she told to Us  in the spring of 2010 about Valentina. “Every single day is a pleasure to see her. I’m always rushing home! I never rushed to go back in my life! It’s the best.”

All this news comes during the same month Lima is set to debut in Victoria’s Secret swim catalog. Out March 28, the gorgeous Adriana Lima set to open-eyes but won’t have that bikini body for too long.