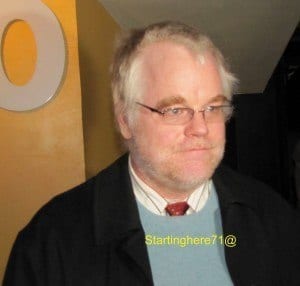 Too often do highly talented artists depart before we’d like them to. Actor Philip Seymour Hoffman, perhaps best known for his Academy Award-winning performance in 2005’s “Capote,” was found dead in his New York apartment around 11:30 this Sunday morning.

A friend had apparently been trying to reach Philip Seymour Hoffman and became concerned at his complete lack of response, according to an official on the scene who wishes to remain anonymous. He went to  Hoffman’s apartment only to discover him lying there with a syringe in his arm and an envelope containing what is believed to be heroin, the official said.

“It’s pretty apparent that it was an overdose. The syringe was in his arm,” the official reported.

Philip Seymour Hoffman had undergone treatment for his addiction previously, although in various interviews he admitted to “falling off the wagon” during the past year or so, after remaining clean for the past 23 years.

Christian McCulloch, 39, who lives nearby, said, “He’s a local. He’s a fixture in the neighborhood. You see him with his kids in the coffee shops, he is so sweet. It’s desperately sad.”

It is indeed desperately sad, and unfortunately, too common. As with many highly talented artists, it is their passion for the craft, dedication to the art, and insane creativity that sometimes fosters a fast-paced lifestyle, which ironically robs them of their ability to share such creative genius with the world. Philip Seymour Hoffman will undoubtedly be sorely missed.