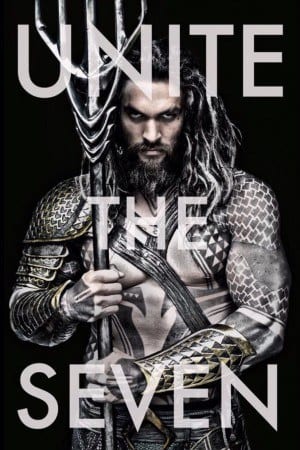 Director Zack Snyder who is currently in post-production for his 2016 release Batman v Superman: Dawn of Justice, has recently shared an image of actor Jason Momoa, in costume as the aquatic super-hero Aquaman. This has been the first image of the DC Comic’s superhero to be seen by anyone, aside from the cast and crew. Although the actor has never officially been listed as a member of the cast for Dawn of Justice, insider sources from the movie industry are certain that Momoa will have at least a cameo role in the film, as Aquaman.

Costume designer Michael Wilkinson avoided replicating the Aquaman that longtime comic fans had always seen; blonde, and tightly clad in an orange and green costume. Instead, Wilkinson’s Aquaman appears as the beefy, armored, version of Aquaman after his 90’s comic book re-make. “There is only one true King. #unitetheseven,” Snyder wrote in the caption of the photo. The hashtag “#unitetheseven” is thought to be Snyder’s attempt at cryptically speaking to fans. It has been theorized that this could refer to the Seven Seas, as Aquaman is the king of the Seven Seas, or it could even be possibly related to the number of members within the Justice League.

Aquaman first appeared in a DC comic book, back in 1941. Often looked over, and never as popular as his fellow Justice League members, Aquaman’s modern character had became a more serious, deeper, person than that which was displayed by him many years earlier. In an August 2014 interview, Snyder told The Ticket’s Stoney and Bill Show exactly what he thought of Aquaman, and went on to defend the superhero’s strengths. He told the Detroit radio station show that Aquaman could “cut the flesh of Superman if they came in contact” and he also said that “It’s not to say that he’s in the movie or anything like that, but he has the potential to be badass.”

Either way, fans will continue to anticipate the release of Batman v Superman: Dawn of Justice, which has among its cast, Ben Affleck, Gal Gadot, Henry Cavill, and Jesse Eisenberg.

[easy-social-share buttons="facebook,twitter,google,linkedin,stumbleupon,pinterest" counters=0 hide_names="force" fixedwidth="yes" fixedwidth_px="111"]
Previous ArticleHTC Allows Android Users To Be A Part Of The Bigger Picture With New Power To Give AppNext ArticleLionsgate Releases Mockingjay In IMAX