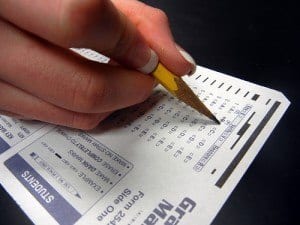 Reports show that the ACT was the most taken in 2012

ACT, the standardized test taken by those looking to enter college, has surpassed the SAT in its amount of test takers according to a Boston.com report. The ACT beat out the SAT by 2,000 test-takers out of 1.65 million.

Although the ACT beat SAT numbers by a narrow margin, it comes as no surprise considering that nine states have students participating in ACT testing under state testing regimen. The ACT has been the popular choice among central states, while the SAT is most common among both East and West coast test-takers.

Scores on several components of the SAT have decreased, including the critical reading and writing sections, both falling by one point in average numbers. Reports also say that only 43% of test takers achieved the SAT benchmark score.

The numbers for both SAT averages and scores are based on The College Board, a non-profit membership organization of schools and colleges. The College Board owns the SAT, and their website releases an annual SAT report. The 2012 report, released Sept. 24, can be found at www.press.collegeboard.org/sat. More information on the ACT, including prep and registration, can be found at www.actstudent.org.