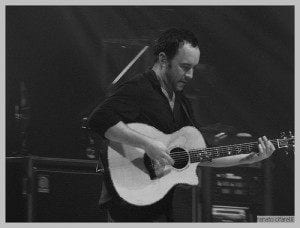 Dave Matthews would have missed his Saturday concert in Pennsylvania if it weren’t for two helpful fans. Dave Matthews went out for a bike ride in Harrisburg before the show, but his bike got a flat tire on the way back to the venue. Stuck without a cell phone to contact anyone, Dave Matthews was rescued by Emily Kraus and her boyfriend.

The couple was on their way to the Dave Matthews concert, when they noticed a stranded bicyclist. Being good Samaritans, they pulled over to help, only to realize that the man was none other than Dave Matthews himself. They loaded up Matthews’ bike and drove him back to the venue.

Kraus told reporters, “We didn’t know how to make conversation with him, in fact, so we were talking about his tour and where he had come from. He had just been in Cincinnati and he said, ‘I’m taking a short break after this one because I have to drop my daughters off at camp.’ … He was just a very humble guy.”

As a thank you, Dave Matthews invited the couple to dinner, gave them backstage passes and front-row tickets (autographing them with the message “Thanks for the ride.”). Kraus said she was star struck and still can’t believe the encounter actually happened, saying “It was surreal. We couldn’t believe it.”

As for Dave Matthews, this isn’t the first time he’s encountered trouble while on tour. Back in 2005, the band’s bus driver emptied the bus’ septic tank over the Chicago River and doused a boat tour of people with the waste. Luckily for Dave Matthews (and the fans), this incident turned out a whole lot better.