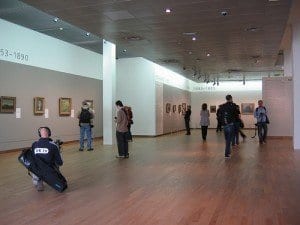 “Sunset at Montmajour” is unveiled at Van Gogh Museum in Amsterdam.

A painting determined as the product of Vincent Van Gogh was unveiled recently at the Van Gogh Museum in Amsterdam, home to the single largest collection of works by the Dutch master.

The new Van Gogh has been determined to be a product of the artist’s “Sunflowers” period (1853-1890). During this period Van Gogh created some of his most masterful works including “Sunflowers”, “Irises”, “Starry Night” and multiple self-portraits. “Sunset at Montmajour” is believed to have been completed in 1888, two years before the artist’s death. Two of the museum’s senior researchers, Louis van Tilborgh and Teio Meedendorp claim that the painting originally resided in the collection of Van Gogh’s brother Theo and was sold in 1901.

The painting, depicting a landscape near Arles, France, is a major discovery within the context of both art history and the art market. Previous Van Gogh’s auctioned in the 1980’s and 90’s broke records as the most expensive paintings sold at the time. “Sunflowers” was sold at 39.9 million, “Irises” for 53.9 million and “Portrait of Dr. Gatchet” for 82.5 million. Determining the authorship of the painting has undoubtedly inflated the paintings value on the market.

Experts determined the painting to be the work of the master painter after much deliberation.  Ruger told CNN that the painting was determined to be a Van Gogh only after, “extensive research into style, technique, paint, canvas, Van Gogh’s letters and the provenance.” However, the museum refrained from divulging the entire story of how the new Van Gogh came to light, claiming that it would be published in the Oct. edition of the Burlington Magazine.  Starting Sept. 24, art enthusiasts can view the new Van Gogh at the “Van Gogh at Work” exhibition at the museum in Amsterdam.

[easy-social-share buttons="facebook,twitter,google,linkedin,stumbleupon,pinterest" counters=0 hide_names="force" fixedwidth="yes" fixedwidth_px="111"]
Previous ArticleAmy Winehouse will be commemorated with exhibit at London Jewish MuseumNext ArticleRace the Sun may be your indie game of the year