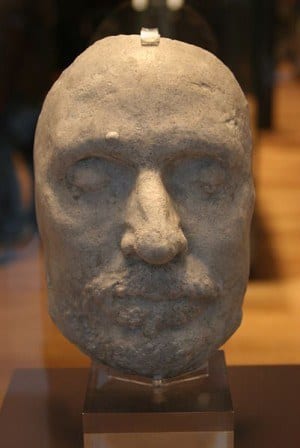 A 9,000-year-old mask is set to be auctioned off at Christie’s June 8. The 9,000-year-old limestone mask will be the oldest art piece to ever grace the famed auction house, reports Yahoo.

It’s estimated that the 9,000-year-old mask could fetch upwards of $600,000. The mask is Neolithic and is meant to represent a human skull. It was found in the Judean dessert.

Molly Morse Limmer, head of Christie’s Antiquities department in New York stated, “Only very few of these masks are known. All were found in the Judean desert, all were carved of limestone, and all represent the human skull.

Limmer speculates that the 9,000-year-old mask was an attempt at connecting with the spiritual realm is connected with some type of religious ritual.

The mask is oddly reminiscent of the mask worn by the slasher Jason Voorhees.

Christie’s described the mask as:

“Fashioned to resemble a human skull, oval in form with thick walls, the reverse concave, the cut-out eyes with narrow ridges extending up from their outer corners over the temples, raised cheekbones below with a ridge extending back, the slender triangular nose with two grooves for the nostrils, the lipless oval mouth open, revealing teeth, with five biconical drill holes along the perimeter.”

While the 9,000-year-old mask may be one of the oldest art piece sold by Christie’s, it certainly isn’t the most expensive. In May 2007, Andy Warhol’s Green Car Crash painting sold for a record breaking $71,720,000. Raffaelllo Sanzio’s portrait of Lorenzo de’Medici sold for a staggering $37,