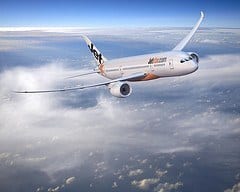 The 787 Dreamliner, the aircraft made by Boeing, was ordered on Wednesday to be immediately grounded by regulators in American, Europe, Japan and India after it was discovered the jet’s batteries posed a fire risk. The safety hazard marks the latest in a line of setbacks experienced by the 787 Dreamliner in recent years, which likely played a part in the choice by numerous countries to ground the airplane voluntarily.

Boeing President and CEO Jim McNerney said in a statement to CBS that the company “deeply regrets the impact that recent events have had on the operating schedules of our customers and the inconvenience to them and their passengers.”

This isn’t the first time the 787 Dreamliner’s batteries have caused problems. Just last week, on Jan.7, a battery pack burst into flames inside an empty Dreamliner sitting Logan Airport in Boston. CBS reports that it took firefighters 40 minutes to put the fire out.

The 787 Dreamliner is Boeing’s newest jet. Created in 2009, the Dreamliner has been held back by numerous setbacks, including fuel leaks, malfunctioning computers and battery problems. According to CBS News, the jet is the first Boeing product to utilize lithium ion batteries, which are lighter and charge faster than typical batteries but have a tendency to overheat.

The Federal Aviation Administration, the government entity that regulates aircraft in the United States, said that they will not allow the 787 Dreamliner to take flight until Boeing can prove the batteries do not pose any safety risks.

“As a result of an in-flight, Boeing 787 battery incident earlier today in Japan, the FAA will issue an emergency airworthiness directive to address a potential battery fire risk in the 787 and require operators to temporarily cease operations,” said the FAA in a statement released Wednesday. “Before further flight, operators of U.S.-registered, Boeing 787 aircraft must demonstrate to the Federal Aviation Administration (FAA) that the batteries are safe.”