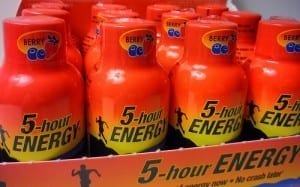 According to the Food and Drug Administration, federal officials have received reports of 13 deaths and 33 hospitalizations over the last four years that cited the possible involvement of 5-Hour Energy—a highly caffeinated energy shot.

5-Hour Energy comes in 2 oz. packages and the amount of caffeine in the shot is equal to two cups of coffee. Aside from caffeine, the shot contains other ingredients, such as high levels of certain B vitamins and a substance called taurine.

The energy shot has grown immensely in popularity over the years. However, government officials are now investigating the product and the side effects it may produce.

Since 2009, 5-Hour Energy has been mentioned in about 90 filings with the FDA. Some of these involved serious or life-threatening injuries such as convulsions, heart attacks and even a case of spontaneous abortion.

The maker of 5-Hour Energy, Living Essentials, said in a statement that it was “unaware of any deaths proven to be caused by the consumption of 5-Hour Energy.” The manufacturer also went on to say that there is no proven link between the drinks and the deaths.

Founder and CEO of 5-Hour Energy, Manoj Bhargava, said during an interview with Nightline that when used as directed, his product doesn’t do any harm. He stated, “It’s overblown. When it’s in small quantities…It’s like this—water is good, but if you have too much you drown.”

Many worry about children consuming this product, especially those with heart problems. 5-Hour Energy said that the product is “intended for busy adults.”