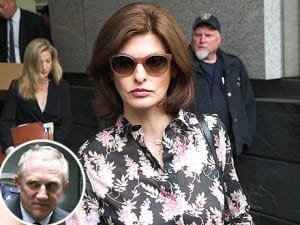 The luxe lifestyle of Evangelista causes problems with ex

The child-support case between former supermodel Linda Evangelista and ex-beau Francois-Henri Pinault is on! Evangelista is looking for $46,000 a month in childcare support for their 5-year-old son Augie.

Evangelista, who famously stated models “don’t wake up for less than $10,000 a day,” was looking rather anguished upon entering the Manhattan family courtroom.

Initially, Pinault told Evangelista, “I would recognize the baby … and I will take my responsibility” and presented a counteroffer to her initial child-support proposal claiming it to be “unreasonable.”

Costs that cover Augie’s care would include a hefty $16,000 in ex-detective chauffeurs and $7,000 in nanny fees. The former model’s income took a turn for the worst when her contract with L’Oreal ended last year. Evangelista’s lawyer states, “Ms. Evangelista is not looking to piggyback on the lifestyle of Mr. Pinault” and justifies it as “looking for a continuation of the reasonable lifestyle of Augie.”

The two were together for a few months back in 2005 but after learning of the pregnancy in 2006 Pinault dumped Evangelista. Pinault admittedly told the court he wanted nothing to do with the baby. “We were dating four months, and I didn’t even know her very much. She was so happy to be pregnant, but it was not planned. I decided to stop the relationship at that point.”

Pinault, a French billionaire, runs a high-fashion holding company that houses the world’s top designers and is now married to Salma Heyek. Evangelista a former cover girl in the late-80s, early-90s was part of the top model elite, the Trinity.