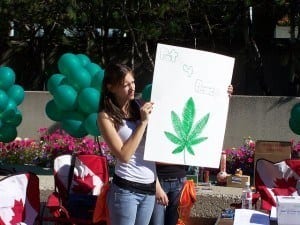 Cities across the country find creative ways to enjoy 420.

420, the term invented by a group of guys from Marin County, California for marijuana, has become, over the past few decades, a day set aside to celebrate the worldwide past time of sitting back, putting your legs up and lightin’ up a joint.  Yup, there’s a day for that now, and across the country, Americans are finding ways to celebrate the stoner’s holiday, 420.

The best 420 parties seem to be in Colorado, maybe because marijuana just recently became legal in that state.  Though, who knows?  Maybe Denver just has the craziest stoners around.  Today, an estimated 80,000 people stood inside the Denver City Civic Park to celebrate the decision last November to legalize marijuana.

“This is what freedom smells like,” attorney Rob Corry told the crowd, according to Yahoo News.  He counted down the moments until 4:20 pm CT, at which point thousands of pot heads simultaneously exhaled, creating a haze that could be seen from blocks around the center.

The event began shortly after 10:00am Saturday morning, 420, as people showed up to the civic center to have fun and for the experience of smoking weed in large crowds.  In November 2012, more than a million Colorado voters supported the passage of Measure 64, which legalized the recreational use of marijuana in the state, according to Yahoo News.

Here’s some other ways ABC News is reporting that the nation is celebrating 420:
-Doug Benson, the comedian famous for smoking pot and making a movie about it- Super High Me, has a stand-up show in San Francisco Friday night, as he counts down to his favorite day of the year.

-Austin, Texas holds its annual Reggae Festival during the 420 weekend.

-Even Pittsburgh is celebrating with “The Bong Show” on 420 for Pittsburgh NORML, a local chapter of the National Organization for the Reform of Marijuana Laws.

How much would you have enjoyed being in Denver or Pittsburgh Saturday night?  Tell the world below!