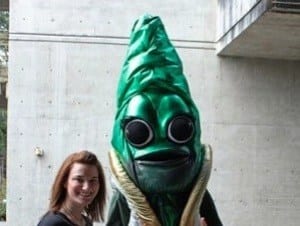 We’ve all had mascots to represent our schools and colleges, and for the most part they are normal creatures, people, or objects that our places of higher education see as a representative. Here are 11 mascots that are a little different than your run of the mill eagle, bear, or wildcat.

Geoducks – Even though Evergreen State College’s mascot has a strange name that suggests that this character is a duck spliced with a geode, it is not. The name itself is not pronounced how it looks, it is actually pronounced “gooey-duck“, and is based off of the Geoduck, an actual clam living in the ocean eco-system of the Pacific Northwest. His most recent costume transformation has had him being referred to as the “Pickle Taco”.

Gompei the Goat – The Worcester Polytechnic Institute mascot/coveted statue has an interesting history. A goat who raised and cared for by a Japanese student named Gompei Kuwada, starting in 1891. The goat was a gift of the class of 1893, but the animal soon was entirely too difficult to maintain. So they did the only thing that seemed to make sense in those days and they beheaded and mounted the thing! Eventually, due to it degrading over the years, it was cast in bronze and mounted on a disproportionately small body.

Charlie Choker – The Grays Harbor College mascot is not based on an individual who is prone to violence, though the name would suggest that he is. The name actually comes from a choke-setter, which is wrapped around a fallen log and then used to pull the log back up steep mountain slopes. So Charlie is just a hefty dude who wraps chokers around logs all day.

Artie the Artichoke –Created by the Scottsdale Community College during a period of student unrest in the early 1970s, Artie the Artichoke was adopted as the school’s mascot as a means express a difference of opinion concerning school budget priorities. Although Artie was started as a source of embarrassment, the school has accepted him and he now holds court as their beloved mascot.

Keggy the Keg – Beer and college? No way! Keggy the Keg is Dartmouth’s unofficial mascot, created in 2003 and debuted at a homecoming football game against Columbia University. The original costume disappeared before the fall term of 2008 and has never been seen or heard from since. His replacement was made and fielded in 2009.

Morty the Eutectic – Although his real name is Mortarmer McPestle, Mort the Eutectic is St. Louis College of Pharmacy’s adored mascot. A common term in Pharmacy, “Eutectic” describes the process of two solids being combined to form a liquid.

Peter the Anteater – UC Irvine has an interesting mascot, and he is of the ant eating variety. Peter the Anteater is, according to uci.edu, a fifty year old male, who stands 6’9” and is a Sagittarius. Any ladies interested?

Scrotie – For our final look at interesting college mascots, we present you with the oddest yet; Rhode Island School of Design’s mascot is named “Scrotie”. And yes, he looks exactly like you might have thought he would. The Rhode Island School of Design explains that his costume has a bright red color on top blending with royal blue for the testicles.