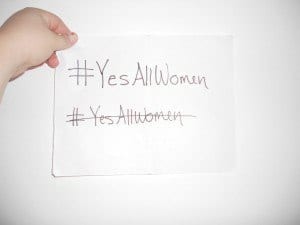 The only time I’ve ever been told I couldn’t do something because I’m female happened on a trip to New Orleans with my best friend. While exploring Bourbon Street, we decided to check out a strip club since neither one of us had ever been. We picked the nicest looking one—one that had a pricey cover charge and a bouncer that wouldn’t bat an eye at cutting off service to drunk, belligerent tourists. As we approached, the doorman (wearing coattails, no less) asked if we had an escort. Our what?  Yes, it seemed all women needed a “gentleman” to escort them into this fine establishment.  I’d like to say that I was deeply offended (since that is supposed to be the only acceptable response), but I wasn’t. Given that the activity I was being denied was watching women gyrate for tips from intoxicated tourists, it didn’t exactly leave me feeling oppressed. My best friend and I laughed it off and enjoyed the rest of our trip and, short of a funny anecdote, I forgot all about the incident.

Cue the social media explosion of #YesAllWomen that happened in response to a terrible tragedy carried out by an entitled individual with seemingly a ton of mental instability. Women and men, celebrities and regular people jumped on the #YesAllWomen bandwagon, but mostly only men opposed the viewpoint. While I appreciate the discussion it engendered, I can’t say I really support the movement. I think it allows women to victimize themselves—which is the exact thing they are fighting.

Let me start by saying that I am a beacon for crazy people. I don’t know what it is about me, but there is something that calls out to every off-kilter individual to sidle on up and give me grief, or put in candidacy to be my new best friend. This was never more apparent than when I worked in customer service.  All through college I worked in a coffee shop and the things I have seen are downright shocking. I have seen people steal, I have seen people fight, and I have seen (and had to clean up after) a deranged individual who defecated on the floor of the lobby.  I have seen someone sucker punch a police officer, throw a shoe, threaten to kill me and my coworkers (somewhere Seattle dispatch has a recording of me threatening said person with a box cutter and a portafilter), and I have been bitch-slapped with a newspaper by a female transient holding a teddy bear. The list could go on and on, but I think that gives the gist of my experiences.

So, I think it is safe to say that on a daily basis, I have dealt with more intrusions than the average person, and that isn’t even including my personal life in the mix. That’s why, when approached with an over-eager male insisting on buying me a drink or making a catcall, I don’t bat an eyelash. I also don’t classify this as immediate harassment. I’d be lying if I said I had never made a dirty joke or said something lewd to, or about a man.  Can being catcalled or being asked to join someone for a drink be annoying? Certainly. However, it doesn’t follow to immediately vilify the man in question. Just because someone is pushy does not mean they have nefarious intentions. I was raised with strong female role models, and I am confident enough in a situation to tell someone to back off—and believe me, they likely won’t be asking again. Don’t be a wilting flower and, as I so often hear, don’t immediately use the “I have a significant other excuse” to ward off an unwanted suitor. Stand up for yourself and you’ll find that it isn’t the only excuse that works. The person who continues to pursue the matter isn’t bad because he’s a man, but because he is a rude and inconsiderate person, regardless of gender.

I lead a pretty cushy life. It’s not perfect, but I (and every female I know) am ridiculously blessed. To my knowledge, I have always made the same as, or more than my male counterparts. I am almost always in a position of authority in my employment (and even when I’m not, you wouldn’t know it). If there is disparity in your workplace, again, make your voice heard. Complaining on social media and then not taking proactive steps to rectify your own situation isn’t going to fix anything. It’s just releasing pent-up frustration and that is not a solution.

My world is not perfect. No one’s is. Guess what, it never will be.  I refuse to blame men in general for some of the problems I face. #YesAllWomen have faced obnoxious men, and obnoxious women. And all men have faced the same. I refuse to blame some of the inconveniences and dangers of life on gender, but instead take responsibility for myself and getting the things I want and being treated with the respect I deserve.