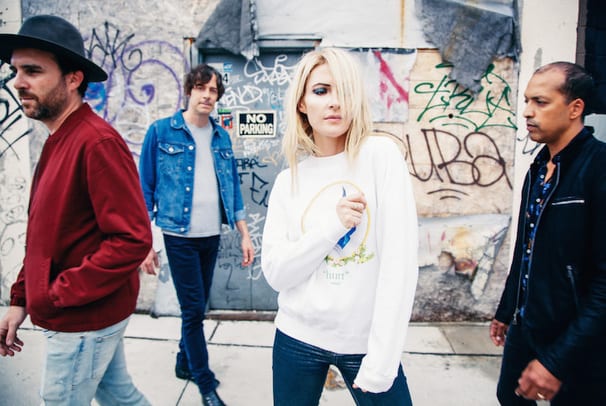 Canadian band Metric have released the video for their new single Dressed to Suppress from their seventh album which is set to release September 21.

In July, Metric released the single Dark Saturday, their first release since their 2015 album ‘Pagans in Vegas’. Noisey describes the single as “one of Metric’s scuzziest and most immediate songs since ‘Fantasies’.”

The Dressed to Suppress music video, directed by Justin Broadbent, captures the band in a live performance, filmed on an iPhone X. The black and white visuals of the video give the song a dark feel, reflected in lead singer, Emily Haines, repeating the lyrics, “Dressed to suppress all kinds of sorrow.”

Haines explains, “Lyrically, the song explores the maze of conflicts we encounter in our attempts at finding and holding onto love; the absurd mating rituals we routinely perform; and the vast divide between the desires our appearances can imply and the way we actually feel inside.

“Sonically, it’s one of the most intense songs on the album. We’re already playing it live and it’s getting stronger every night. The contrast between the delicate, dreamy opening and the heavy riffs of the verse and chorus match the dramatic emotional shifts we all go through when we allow ourselves to be vulnerable, the push and pull of retaining our own identities in love.”

The band has collaborated with Justin Meldal Johnson, who has previously worked with M83 and Nine Inch Nails, to produce their album. “Justin was just what we needed in a producer for this album,” says Jimmy Shaw, the band’s guitarist. “Making this album brought us together in a way we hadn’t been for quite some time and I think you can hear it in the music.”

The currently unnamed new album is available for pre-order and fans who pre-order the album will receive a signed Dark Saturday seven-inch vinyl.

Metric fans can see them currently supporting for Smashing Pumpkin’s Shiny and Oh So Bright tour. They are also going on an overseas tour in October 2018, kicking off in Moscow, Russia, and travelling around Europe.