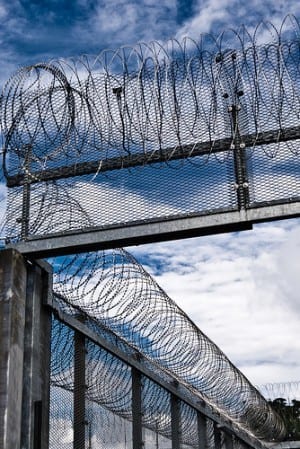 First they put you into prison, and then they… sterilize you?

I’m not quite sure where they’re going with this whole idea, but it has come to light recently that the California Department of Corrections and Rehabilitation have been promoting the option for female inmates to get sterilized. Since 2006, 150 inmates have been sterilized without permission from the state.

Why they’re doing this? Good question.

Apparently some psychologists have been putting out the idea that women are getting pregnant and then committing crimes just to get into prison in order to have better health care. While that may be true for some cases, some are just being forced to do something that they don’t even want.

Unsurprisingly, a man—Daun Martin, who is a licensed psychologist—agrees with the accusation.

“Do I criticize those women for manipulating the system because they’re pregnant? Absolutely not. But I don’t think it should happen. And I’d like to find ways to decrease that,” Martin said.

But this angry 73-year-old may have some personal biases going on. The prison’s former officer, William Kelsey, brings to light how the issue has been a disagreement between many of the staff (for good reason). Kelsey said that other officers, along with him, thought that the procedure wasn’t necessary. He suggested in a meeting in 2005 that those who were for the procedure just didn’t want to have to spend the time or money helping young women in prison have a baby.

“They were just fed up,” Kelsey said. “They didn’t think criminals and inmates had a right to the care we were providing them and they let their personal opinions be heard.”

Dr. Ricki Barnett, who oversees the costs of the California Prison Health Care Receivership Corp, is also weary of the decision to go through with the sterilizations, but brings an interesting perspective to the issue.

“When we heard about the tubal ligations, it made us all feel slightly queasy,” Barnett said. “It wasn’t so much that people were conspiratorial or coercive or sloppy. It concerns me that people never took a step back to project what they would feel if they were in the inmate’s shoes and what the inmate’s future might hold should they do this.”

Crystal Nguyen, another former inmate, tells of her thoughts when she first heard what the institution was doing to women while working in the infirmary in 2007.

“I was like, ‘Oh my God, that’s not right,’ ” Nguyen said. “Do they think they’re animals, and they don’t want them to breed anymore?”

A woman who had the procedure done after she had her baby while in prison hadn’t even been told what was happening before getting sterilized. Nikki Montano, a mother of seven, had pleaded guilty to burglary, forgery and receiving stolen property. But that doesn’t make her the prime recipient of the procedure. According to Montano, she didn’t even know why she was being sterilized.

“I figured that’s just what happens in prison – that that’s the best kind of doctor you’re going get,” Montano said. “He never told me nothing about nothing.”

While she may have agreed without hesitation to proceed with the surgery and doesn’t regret it, that doesn’t mean that other women aren’t regretful of their decision. They need to be told exactly why they’re being offered the procedure and decide for themselves.

At first it was only women who have had three C-sections that were offered the option to be sterilized, because it could be dangerous for them to have any more children. If they get pregnant again, the risk of death is much higher.

But that wasn’t the case for another victim of the doctor’s firm hand.

Christina Cordero, a former inmate and mother of five, was pressured into getting the surgery by OB-GYN, Dr. James Heinrich, even though she hadn’t had three C-sections.

“As soon as he found out that I had five kids, he suggested that I look into getting it done. The closer I got to my due date, the more he talked about it. He made me feel like a bad mother if I didn’t do it,” said Cordero. She agreed to the surgery, but not without regrets. “Today, I wish I would have never had it done.”

While Heinrich denies pressuring women, he said that he was only providing the service to women who had severe health risks that came with another pregnancy. The question is how many women actually had “severe” health risks? It’s ridiculous to make that claim when he has sterilized 148 women.

It may seem okay at the time to pressure women to go through with the life-changing procedure, but when it encroaches on women’s rights to disagree then it gets muddy. It’s not okay to pressure a woman, let alone a pregnant woman. It’s obvious that the people who agree with the sterilizations are just angry workers who believe that the money should be going into their bank account rather than being invested in these pregnant women.