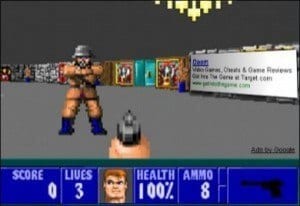 The classic PC game celebrates its 20 year anniversary by going free, for a time

Wolfenstein 3D celebrated its 20 year anniversary Wednesday with a celebration every gamer can enjoy, a free edition of the game was made available via the web.

Wolfenstein 3D broke onto the scene 20 years ago this month and immediately became popular among its original PC-gamer fan base before spreading across numerous gaming platforms. The game is considered by many as the foundation for the first-person shooter (FPS) genre that now dominates the gaming industry.

To celebrate the anniversary of this classic, oft-forgotten, game the makers Bethesda Softworks has made the game available for free through your web browser or iOS device. The game was also available for free via Apple’s App store, but for Wednesday only.
Just to be clear, and regretfully to disappoint, the free edition of the game was only available Wednesday. Beginning today, Thursday, the price returns to $1.99, a bargain considering the sheer nostalgic factor alone.

The original Wolfenstein 3D was the product of developer id Software and quickly became a break-out hit, though it is often overshadowed by the immensely popular Doom, of which it shares numerous qualities. For instance, both were originally released in the then popular shareware format that allowed gamers to play the first portion of the game freely but required a purchase for the remainder of the game.

Personally, Wolfenstein 3D was the first game I ever played and I harbor many fond memories of playing when I was not supposed to, as I was just a little tyke. Frankly, watching Wolfenstein 3D turn 20 makes me feel old (I’m not), though I feel a sense of pride knowing my generation birthed the FPS genre so many, myself included, now worship.