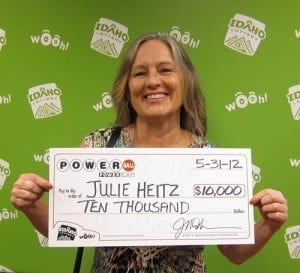 Paying an extra dollar for Power Play can work wonders

Wednesday marked the 13th stagnant Powerball jackpot in a row, leaving Saturday’s Powerball drawing with a prize of $254 million.

The last time a Powerball jackpot even came close to this value was a $336.4 million prize that went to an 81-year-old woman from R.I.

According to WebProNews, the winning numbers Wednesday were 3,7,11,15,28, with the Powerball number, 12. In Wednesday’s Powerball drawing, 22 people took home one million dollars.

The Power Play option benefited more than one person Wednesday night. Of the 145 winners of $10,000, 29 won an additional $30,000 because they paid that extra dollar.

Twitter is buzzing with hopeful comments – as well as offers – concerning the Powerball jackpot. Saundi Gabe Faulk wrote that, “I need a #favor from everyone: PlEase play a#powerball tix for ME & when it win I’ll pay you back out of the #253million we’ll win! <3 [sic].”

Another tweet regarding the Powerball jackpot read, “Powerball is $253 Million on Saturday. I know I am not old or an illegal immigrant but will still buy a few tickets just in case.”

According to Lottery Post, all of the first five numbers, as well as the Powerball number were less than 31, which is typical for lottery. Normally people enter the birth date numbers of their relatives, which is why a winner is more likely when low numbers are entered into Powerball jackpot.