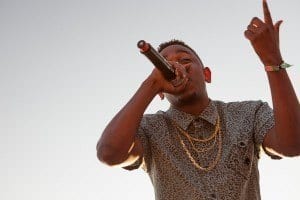 At one point or another, almost every notable rapper has tested their skills in a rap battle. Whether it is the iconic image of Eminem in his movie 8 Mile or a young Kanye West spitting some verses at a local record store. The most recent rapper to have a video released is Compton born Kendrick Lamar.

A video was uploaded to WorldStarHipHop.com, which featured the young rapper showing incredible lyricism and battling an unnamed competitor.

It is interesting to see footage surfacing from Lamar’s early days as a rapper when he was still known by his MC name K-dot. It seems there is a common misconception around hip hop that the days of freestyling and battle rap is on the decline. However, every rapper passionate enough about their craft comes through the tradition of battle rapping, whether it is confrontational or merely competitive.

It is also interesting to see a young Lamar resemble the “character” or younger self that his last studio album good kid, m.A.A.d city is based around: a young kid from Compton who gets caught up in the trouble of the community around him, but has a way out through rapping.

One of the more memorable lines from the video is when Lamar says, “I’m so ahead of my time, I got niggas 5 years from now pressin’ rewind.”

Little did he know how right that statement would become.