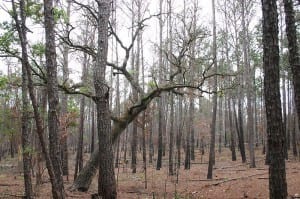 Utah booby traps, doesn’t sound like something that would be found on a popular hiking trail, but that’s exactly what U.S. Forest Service Officer James Schoeffler found in Provo, Utah.

The two Utah booby traps were designed to be concealed against the forest’s backdrop with one being a 20-pound boulder and having sharpened sticks tied to it connected to a trip wire. When triggered the booby trap would swing down at a hiker, roughly around the height of their head. The other was much more Machiavellian and designed to trip people, sending them into a sharpened bed of wooden stakes.

The Detroit News reports that Officer Shoeffler received a tip of unusual activity along the canyon trail in Provo, which is about 45 miles south of Salt Lake City. Lucky, Shoeffler has had twelve years in the military as a bomb disposal technician where he disarmed devices in Iraq, Afghanistan and the Balkans, so he was able to immediately identify the traps

“Typically, anywhere I’ve been, if there’s one, there’s two, if there’s three, there’s four,” Schoeffler said. “The way I treated that is the way I would treat a scene in a deployed environment … As a bomb disposal technician, you would find and disarm them.”

The discovery of the Utah booby traps led to the arrest of Benjamin Rutkowski, 19, and Kai Christensen, 21. They were booked into the Utah County Jail Saturday on suspicion of misdemeanor reckless endangerment. They claim they set the trap to catch wildlife, but officials.

“When you look at those things, you just get chills down your spine,” Utah County sheriff’s Sgt. Spencer Cannon stated. “One sends a rock the size of a football speeding at your head. The other is even more nightmarish. Walk into that trap and either you get the worst headache of your life or a stick through your eye.”

The trail is a popular destination for both families and children. In fact, the day the booby traps were found, there was a children’s birthday party down the trail.