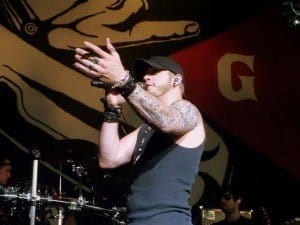 Brantley Gilbert has a book of love songs in which he sings about a broken heart and the one that got away.

Well it turns out that the one who got away and who also happens to be the subject of his popular love songs, “More Than Miles” and “You Don’t Know Her Like I Do” is now back in the picture as Gilbert’s fiancee after he recently popped the question.

According to multiple reports, the two dated more than ten years ago before parting ways and reuniting to renew their past love.

While Gilbert hasn’t revealed the name of the lucky lady, it is said that she is a teacher in his hometown of Jefferson, Georgia just a mile away from his home.

“We’re looking towards the end of June,” Brantley said, when asked about a wedding date.

In January 2013, he became engaged to fellow country singer and actress Jana Kramer, but the two called off their engagement by August of the same year as a result of what Kramer credits to their hectic schedules and career demands.

Brantley has remained rather secretive about his relationships, but it appears that things have worked out the way they were meant to and the singer-songwriter is finally happy since rekindling with a past love.