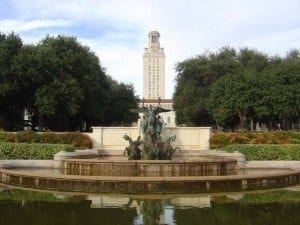 Both school have been cleared to open after evacuation and inspection

University of Texas Austin and North Dakota State University have reopened their campuses after evacuating in the face of bomb threats Sept. 14. Both schools received threats around the same time, but no such devices were found after searching of both schools.

At 8:35 a.m., a man who claimed to be a part of the terrorist group al Qaeda called the University of Texas Austin and said he had placed bombs all over the campus, according to University of Texas spokeswoman Rhonda Weldon. The man told the receiver of the call that the bombs would go off in 90 minutes. The school evaluated by 9:50 a.m.

On the Northern border of the country, North Dakota State University also received a bomb threat for the school’s main campuses in Fargo that morning around 9:45 a.m., according to the Associated Press. NDSU also evacuated and inspected its campuses.

After inspection and with no incidents occuring, UT Austin stated that the campus has been cleared and would be reopened by noon. “We are extremely confident that the campus is safe,” University of Texas President William Powers said at an early afternoon news conference.

Classes were cancelled at the University of Texas Austin, but scheduled activities after 5 p.m. would not be. NDSU buildings reopened around 1 p.m. and classes resumed an hour later.

Both campuses have been deemed safe by authorities. It is unknown if the threats occurring at NDSU and UT Austin are related.