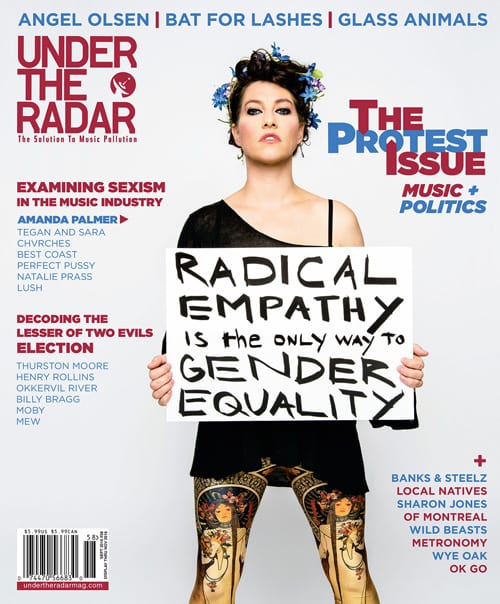 The senior editor of Under the Radar magazine, Mark Redfern, tells College News the inspiration behind their latest Protest Issue. Mark and Wendy Redfern, who have run the magazine for nearly 15 years, publish a Protest Issue every election year. This year, Mark has a message about the dangers of Donald Trump and why you shouldn’t vote for a third-party candidate in the upcoming presidential election this November.

“I think that if you don’t want Trump to win then you got to vote for Hillary. So I think it is incredibly important to first of all vote, and second vote Clinton.”—Mark Redfern

In our interview, Mark also shares a few inside strategies on arranging a photoshoot. He tells us a bit about his diverse family back ground, a heads up on the next issue of Under the Radar magazine and why he is donating to the American Cancer Society.

College News: Can you give us a bit of background about you?

Mark Redfern: I was born in England and I moved to America when I was seven. My mom is American and my dad is English. I was born in London but when my parents split up, my mom decided to return to America. So I have a complicated background. I have two passports so if Trump gets elected then I can go live in Europe!

CN: It is such an appropriate time to come out with a Protest Issue with all the protesting going on right now in North Carolina and North Dakota. How did you pull all of this together?

M.R: The first Protest Issue we did was back in 2004. That was when Bush Jr. was up for re-election. My wife Wendy and I obviously weren’t big fans of the Iraq war and we weren’t big fans of George W. Bush. When we do these Protest Issues, we are open to hearing from both sides of the aisle. Unfortunately, it’s incredibly hard to find any indie rock type musicians and artists that are Republican leaning, but in a way, we just wanted to make a difference. I’m not sure how we came up with the idea to come up with protest signs with musicians, but we had a great response from our readers. So we decided that every four years, we would tie it into each presidential election and this is the fourth one we have done. This one feels like when we were up against Bush because Trump is probably the scariest candidate that’s run in my adult lifetime. You’d be surprised about how many musicians actually don’t want to take part in making protest signs. But we got about 40 to 50 musicians. You start doing these things and at first, you are like “oh no, is it going to come together?” because you don’t know if you are going to get who you want. But then we got Lauren from Chvrches and we got Tegan and Sara and a couple big names like that. So we felt pretty good about it.

CN: You can make your own sign and share your photo on social media using the hashtag #protestissue?

CN: I recently interviewed Wyclef Jean and he spoke about how the Bernie Sanders movement isn’t a dead movement and what people can do moving forward. What can you speak on that?

M.R: I agree with that. I think that if you don’t want Trump to win then you got to vote for Hillary. My wife and I were big Bernie Sanders supporters. We happened to be up in New York on the day of the New York primary and we went to one of his rallies. It was really cool. I know a lot of people who are progressive that are disappointed that Bernie didn’t win. Some said that they were not going to vote. Others said they were going to vote third-party.
I know people have issues with Hillary Clinton. Some of my friends on Facebook call her a war monger. She is for the establishment, but compared to Trump, she’s a million miles more sensible. She has a lot of experience. Maybe she has done things that are questionable. I don’t really know. Most of the stuff you hear negative about her is from the Trump campaign.

CN: What do you think about Republicans not voting as a means to defy Trump in this election?

M.R: I was in England over the summer for two months and everyone was just appalled by Donald Trump. They just couldn’t even imagine he was one of the nominees of a major party for this election. The embarrassment it would be internationally on this country if Donald Trump became our president. I was in England this year when the EU referendum vote happened. Most of my friends and family there were against leaving the EU. Everyone thought that there was no way England was going to leave the EU and the polls seem to indicate that they weren’t. However, enough people voted and Brexit went through. People in America need to realize that they might think that America isn’t going to vote Trump in this election, but in Virginia, all I see is Trump signs. I don’t want to paint the picture that the Protest Issue was all pro-Hillary and anti-Trump. That is not necessarily the point.

CN: You have the protest signs being auctioned with the proceeds being donated to the American Cancer Society. Where can we go to follow that?

M.R: It starts October 18 and it ends October 25 at 2 PM. Every year we choose different charities to work with; last time was War Child. They benefit children in war torn countries, so it’s a great charity. The reason why we went with The American Cancer Society this time was because my sister and dad both passed away from cancer in the last two years. I just felt like I needed to benefit that charity. We see all this money spent on the military and on wars—if only a bit more money was funneled into cancer research.

CN: Where can we find the Protest Issue?

M.R: We are distributed nationwide at book stores like Barnes and Noble and most newsstands in cities like New York, L.A and Chicago. Under the Radar is also available digitally! Under the Radar has recently launched a Patreon page and you can support them there: www.patreon.com/under_the_radar.

Look back on: Clinton, Sanders and What Comes Next After Iowa