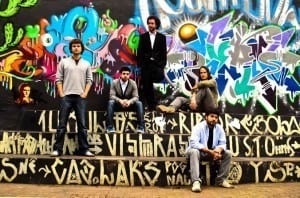 Give your ears something good this morning

Sao Paulo, Brazil, 1996 — drummer Daniel Freiberg and guitarist Patrick Caracas began playing together at the age of eight. What would eventually become a company that creates and performs prog metal, Unconscious Disturbance is known for its musical color and complexity.

In 2004, vocalist Frederico Carneiro joined Freiberg and Caracas, and UD was born. The trio recorded their demo at a local recording studio where sound engineer and bassist Fadel Dabien, upon hearing the music, was instantly captivated and joined the band. Shortly after, they began to hold auditions for a second guitarist. However they soon realized that Daniel Freiberg’s younger brother, Kiko Freiberg, who would eventually receive a B.A. in Music at Bard College, was a perfect fit. UD was now fully formed.

In 2007, after recording their first low-budget EP, UD went on tour through Canada, where they were very well-received. They spent the next five years writing Mind’s Corner, their first major studio album, which will be released late 2012.

They currently reside in Brooklyn, NYC.

The video for ‘Benign” is directed by –––––––Sonia Soares, a Brazilian choreographer and performer who runs Viga Espaco Cenico, a theatre in Sao Paulo. The video features breath-taking storytelling by way of dancing via professional ballerina’s Irupé Sarmiento of Argentina and Carina Nagib of Brazil.

“The lyrics in ‘Benign’ are an outburst from one person who is expressing their feelings to another,” states vocalist Frederico Carneiro. “The dancers represent these two characters, where the dark haired dancer is the narrator and the light haired dancer is the person receiving the message. The video depicts the interaction that the two people have with one another, and moves according to the expressions from the narrator.”

‘Benign’ is cut from UD’s upcoming full-length album, Mind’s Corner, set to release independently via the band on December 4, 2012. The album features seven additional tracks, set to premiere on the web in the coming weeks.