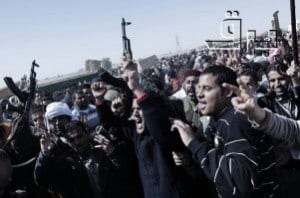 U.S. Ambassador to Libya, Christopher Stevens was killed along with three other American diplomats late Tuesday when religious extremists stormed the U.S. Consulate building in Benghazi. Reasons for the attack can be attributed to Muslim protest of a film made in the U.S., which insults the Muslim prophet Muhammad.

When Libyan soldiers outside the Consulate building were overwhelmed by an armed mob of protesters, Ambassador Stevens and several other officials were moved to another building to escape the unruly crowd.

There was speculation that guards revealed the position of the officials to members of the Ansar al-Shariah jihadist brigade, as the armed protesters proceeded to burn several of the embassy’s buildings.

However, there are claims that Ambassador Stevens may not have been killed in Tuesday night’s attacks, but rather early Wednesday morning when his motorcade was hit with a rocket-propelled grenade launcher.

News of Ambassador Stevens’ death comes with nothing short of remorse from Washington in statements from both President Obama and Hillary Rodham Clinton, expressing their sorrow for the innocent lives lost devoted to preserving American ideals of liberty.

Libya, whose new government has struggled to impose authority on gangs and armed rebel brigades, has been on a manhunt for those suspected in the murders of the officials.

So far, Libyan government has come up empty handed in their search for the culprits who are believed to be a part of Ansar al-Shariah, the militant group of fundamentalist Muslims believed to be held responsible for the attack.